This preface, entitled “Palestine: From Exception to Example,” is written by Michael Hardt. To jump ahead to MTL’s interactive collages, click here.

Palestinians live an exceptional political situation, and have for decades. The daily realities of occupation and the constant state of war with Israel, in its various low and high intensity forms, are dominant facts of life in Palestine.

Too often, however, focus on the state of exception effectively suspends discussion of real political issues and conflicts. One thing I admire about MTL’s text-image project is the way it “de-exceptionalizes” Palestine. That, of course, does not mean somehow forgetting about the settlements, the wall, the checkpoints, the targeted assassinations and so forth. And it certainly doesn’t mean passively accepting or becoming resigned to the current situation as the new normal. Indeed the brutal realities of life under occupation are front and center here. But this project also recognizes how Palestine is part of the global neoliberal order and how Palestinians suffer and struggle in ways that are parallel to those elsewhere.

As an initial attempt to analyze the current economic and social crisis Toni Negri, co-author of the “Empire” series, and I proposed four subjectivities that (among others) increasingly define who we are and how we are controlled. Toni and I were focused on the encampments and occupations of 2011, primarily those in Tunisia, Egypt, Spain, Greece, the US and the UK, but these subjectivities of crisis are emerging all over in one form or another.

First of all, we are indebted, that is, people have to go into debt in order to satisfy basic life needs such as housing, education and health, and many of them have no prospect of ever being free of debt. Second, we are mediatized, in the sense that we are caught up in a variety of media networks that render us passive users and receivers of information and fabricated knowledge. Third, we are securitized, in other words, subject to security regimes that, in a general atmosphere of fear, combine vast surveillance apparatuses with implicit and explicit threats of coercion. Finally, we are represented, and thus made passive in governance systems that claim to act in our interests and effectively prohibit our direct collective political action. One certainly could (and should) add other subjectivities to this list, such as the precarious and the exploited.

The lives of Palestinians presented and analyzed in these images and texts offer powerful examples of these subjectivities of crisis, sometimes in extreme circumstances. The conditions of the indebted, for instance, become more complex and harsher in the context of occupation, where the bonds of debt are intimately interwoven with the militarized security regime. An occupier can effectively control a population through debt and even make use, directly and indirectly, of the debtor/creditor relations among the occupied population. Like those elsewhere, of course, Palestinians do not passively accept their position as the indebted (or as these other subordinated subjectivities) as the simple reality of contemporary life. Instead, they take these positions as points of departure for struggles of liberation.

Palestine is unexceptional, then, in the sense that it shares some of the primary axes of domination that characterize the current crisis across the globe. And Palestinians are discovering new means to rebel against them. In this way, rather than an exception, we can see Palestine and the struggles of Palestinians as exemplary—a lesson and inspiration for those fighting back around the world.

What is a map? For the colonizer, it was a plan of action and a testament to conquest. It was a blank piece of paper awaiting those who were allowed to draw lines. Lines were supposed to be clear, marking boundaries. The Green Line was one such division. Today, the official map is incomprehensible. Boundaries extend below ground and into the air. Checkpoints, roadblocks, crossings and walls are everywhere. The lived experience is one of being blocked at every turn. Resistors plant flags on Israeli vehicles, graffiti the Wall and visualize their own securitization. In such times, mapping becomes a form of resistance. But in the era of GIS and GPS, maps do not describe physical features. The map indexes debt, deprivation and destruction that the colonial power would prefer to remain invisible—so that these conditions are recognized as normal and acceptable, as if they are a part of the landscape itself. 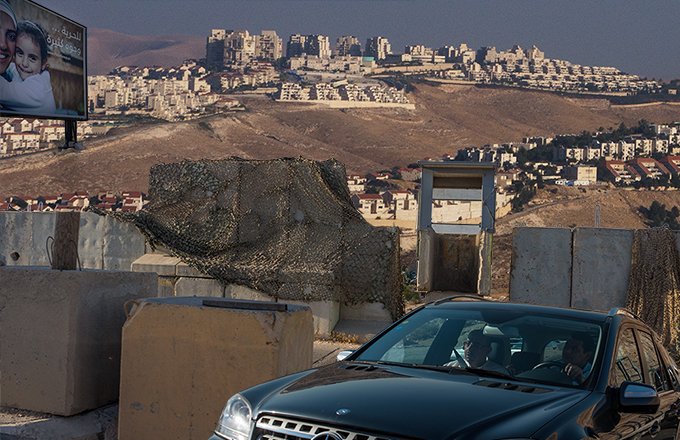 What is the face of freedom? Eminent Jewish philosopher Emmanuel Levinas said that when we look into the face of the Other, we are bound to them; we recognize our duty to them. What about the Palestinians, he was asked in a radio interview after the Sabra and Shatila camp massacres in 1982? “My definition of the Other is completely different,” his evasive reply began. Imagine being so othered that you can’t even be the Other. The only one that will look at you is the bank, calling for you, hoping to lend you money. Imagine being the one that does the othering. You would put your houses on the highest place you could find and you would make all the windows look out. You would not remember that this was how the slave-owners built their houses. 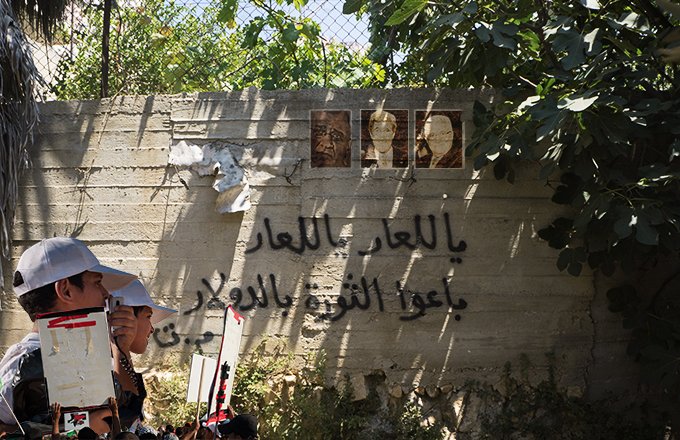 What have we learned since the Arab Spring burst out of Sidi Bouzid, Tunisia, in December 2010? Have we not realized that the era of representation is over? Or at least, that it should be? From Buenos Aires to Madrid, the cry echoes: “Que no nos representan! They cannot/do not represent us!” The writing is literally on the wall. In this case, it reads: “a revolution sold for dollars.” Since the collapse of the 2011 social movements, this slogan resonates widely. Above the text, the empty faces of the faux-negotiators stare at us in bad faith. What we are confronted with is a space with no way out, just the possibility of a crack in the wall. When even the sky is fenced in, seeing what is happening takes great effort. 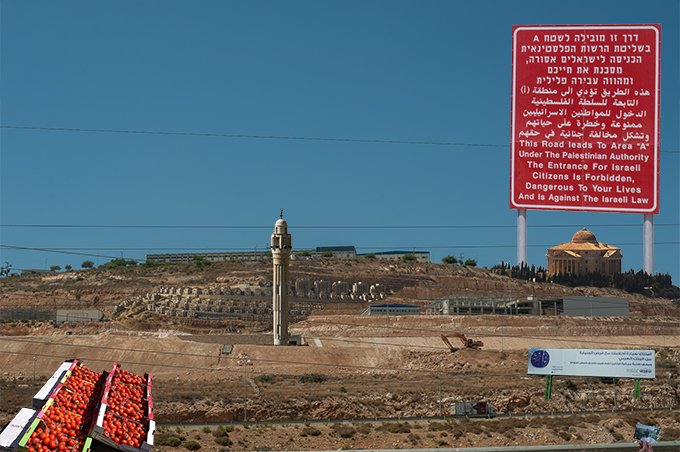 “This road leads to area A under the Palestinian Authority. The entrance for Israeli citizens is forbidden, dangerous to your lives and against Israeli law.” Area A is a place nominally under the control of the Palestinian Authority in the new bantustans of the West Bank. Area “A,” as in Apartheid. A is also for Amos, the Biblical prophet. Fifty years ago, Dr. Martin Luther King Jr. quoted the Old Testament figure in his “I Have a Dream” speech: “Let justice roll down like waters and righteousness like a mighty stream.” King dreamed of seeing the “whites only” signs come down in Alabama and Mississippi. Roads across Israel/Palestine are segregated today according to the license plate on your car. An orange license plate gives you access everywhere, but Palestinians receive a white-and-green plate that limits the owner to specified roads. 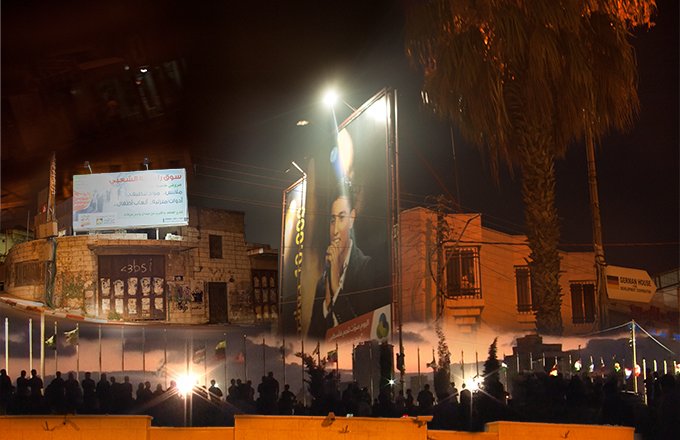 In neoliberal economies, where people are beleaguered by debt and without stable work, there are novel ways of keeping the financial wheels turning. The attention economy turns people’s attention into money. It’s called “monetizing eyeballs.” Click on an ad and someone makes literally 2 cents. The British franchise Pop Idol has become a key node in the global attention economy, creating Arab Idol, among other spectacles. Mohammed Assaf, a clean-cut young man from Gaza, with a dazzling smile, won the competition in 2013. His fifteen minutes of fame became a hieroglyph, revealing at once the wasted talent of so many Palestinians and the deeper realities of an occupation, including the failure of the Palestinian leadership.

No attention is required for the so-called security industry to make its revenues. Scholar David Graeber estimates that one in four U.S. citizens works in the carceral world of the prison-industrial complex–prisons, police, the military, private security. It expands daily. Global corporations like G4S run private prisons worldwide, generating profits that find their way into pension funds for teachers, professors and others who think they have nothing to do with it. There are 5,000 Palestinian political prisoners. In the non-linear global economy, does one Assaf equal 5K prisoners? Or the 26 (out of a total of 104) released before the first round of the latest negotiations? 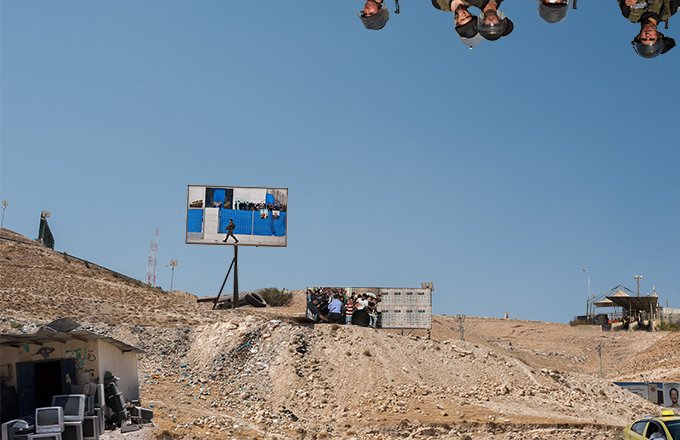 After the enclosure, space. Time to reflect. To sit in the shade of a tree and think. It’s not easy. The olive tree thrives in poor soil and tolerates drought, perfect for these climate-changing times. It lives for centuries, even millennia, but the Israeli settlers delight in uprooting Palestinian trees. The Wall separates many farmers from their olive groves and permits to cross have to be sought to harvest the fruit. Does it feel like winning to fence off a tree? To live behind concrete walls and do guard duty in concrete towers behind filthy windows? A different project is afoot. It thinks long term. “The barbed wire takes root in the land.” What will its fruits be?